Brigit has developed an interest in scholarly pursuits, and I decided that I should also invest in creating a scribal kit for myself that I can take with me to events. Sadly our system does not allow for much sitting around the camp pursuing scholarly arts (which isn’t a bad thing …) but it does mean that every time I take out my ink I risk a fight kicking off.

However, all complaints aside, I took a scribal kit with me to Springfest and the Leeds Invite and much fun was had. Taking inspiration from the kits and works of Ian the Green, Alexandre Saint Pierre and others in the SCA who share their beautiful works and teachings online; I made for myself a Fools and Heroes friendly kit which is not exactly period but will, in my opinion, still make some beautiful scribal works.

In this walk-through I will show you the contents of my kit, my scribal bag and photographs of the scroll I prepared to give to the Dragons of Cathay. 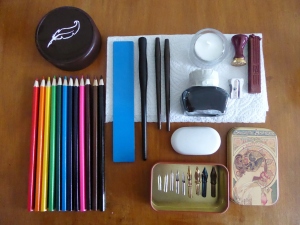 Because of the contact nature of LARP, and the fact I knew I would be putting the kit / bag down regularly to avoid hitting people in the face during camp attacks / skirmishes. Nothing could be worse, I think, if you’ve been put to the floor and roused only to be actually knocked out by someone’s bag with a coffee jar in it …

Yeah, I’m not being that person.

The kit itself fits inside a coffee jar (because I had one to hand and it had an opening wide enough to wedge the tin containing my nib inside). I put kitchen paper around the outer edge to act as “blotting” paper (though actual blotting paper / an old cloth napkin would be better). Kitchen paper is not ideal but it’s cheap, plentiful and would do well enough to mop up spills/replace whilst on site. In future I’m going to take something better so that I don’t get torn bits of paper in my nibs, but this is why we try things – we learn!

I taped my ink bottle (a bottle bought from hobbycraft rather than my nice stuff) closed with masking tape to try and minimise leaks. I also kept the jar as upright as possible so as to not risk upending it everywhere, and wedged it in the bottom of the jar to pack it round with everything else. This did lead to having to upend the whole lot whenever I wanted to write, but that’s a small bit of hassle for peace of mind. I also popped a candle in to light if I was going to use sealing wax. I normally use a lighter when at home, but decided that as I carry a tinder box in-character a candle would do the same job. I even bought a candle with IC money to carry one in my scribal tool kit!

I packed around the ink with a stick of sealing wax and seal, and a pencil sharpener, before filling in the gap with a small ruler, coloured pencils and my dip ink pen holders. Ideally I’d use coloured inks if I was going to do nice calligraphy, but that requires more ink and brushes and other stuff. My jar was full as it is, and for the sake of convenience I thought coloured pencils wouldn’t be too bad. When at home I use ink for my works it its appropriate / requested. I would prefer to carry a metal ruler rather than a plastic one (which is hard to masquerade as an IC piece of equipment) but it fits the jar and does the job. Win. I can also turn the lid upside down and use it as a water pot.

I use a collection of dip ink pens and nibs depending on what I’m working on. The Postman’s Knock has a tutorial on using a dip ink pen for modern calligraphy, and Ian the Green has a couple of useful tutorials on cleaning your dip ink pens and on practicing your calligraphy. Because I’ve got some speedball nibs and some wider nibs I ended up carrying 3 different pen holders, but I kept the nibs packed in my tin along with my eraser wrapped in kitchen paper (to try and keep it clean of ink and dirt). I should probably not dip my pens and just brush ink on the backside of the nib, but I’ve come across conflicting advice on how to best use a dip ink pen, so I guess it’s up to you at the end of the day.

I took a number of sheets of A4 paper, a couple of pre-cut scrolls of paper and an A5 sketchbook that I’d rebound to make it look IC. After buying a cheap A5 sketchbook from hobbycraft, I wanted to hide the English writing as that’s not the IC script in game. Carefully pulling out the staples I turned the cover upside down so that the English writing was on the inside and threaded a needle with standard black polyester thread – the sort you’d use for hemming trousers or sewing on a button. Knotting the ends I passed the needle from the inside of the spine outwards and then back into the book through the holes left by the staple. Do this a couple of times, keeping a reasonable length of the knotted end free. When you’re happy the cover’s secure, knot the threads together and trim close to the knot. Do the same at the other staple points. Tada – vaguely IC book. By carefully taking the center sheets out I could take an A4 piece of working paper from the book, which can then be torn down the fold or used as a whole piece (avoiding the tears made by pulling out the page) for drafting or note taking or similar.

There are lots of ways of making hand bound or sewn notebooks. This is something I’m looking to try my hand at again, but here are a collection of tutorials that I used to make myself a book for my physician when I started. There’s also a tutorial here on making a book with a sewing machine using recycled materials – might prove useful to you eco-warriors out there …

So, my scribal satchel came about because of an accident. Literally. I had a woollen jumper that I loved but was full of holes. It was tumble-dried when it shouldn’t have been and shrank so much I wasn’t able to even turn it into a jumper/top through stubbornness. It was too lovely to just throw away, but too wrecked to gift it to charity guilt-free, so I decided I would attempt to make a bag out of it. 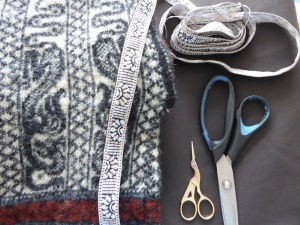 The bag itself was inspired by a friend’s own sewing bag – made out of a rectangle of cloth, whip-stitched together and with a beautiful woven shoulder strap and metal weight to keep it closed (you know who you are!). My own is significantly lumpier and chunkier and definitely lopsided, but I made it out of a jumper I loved and will get to continue to love it a little longer.

I cut the jumper into bits – front, back and sleeves – by cutting along the seams as carefully as I could. I decided to sew the bottom together and trim the front and back into rough rectangles following a line in the pattern that just skimmed the collar at the front (part of this was caught up in the seam, so it’s ok). I then used one sleeve, cut along the length to unfold it, as a flap and sewed the top of the sleeve to the top of the “back” which led to a lumpy rectangle that angled at one side to a sort of point.

I chose to line the bag with a splash proof lining to a) keep spilt ink inside and b) keep rain out to some degree. With the body of the bag sewn together I then pinned the wool on top and cut around it to make a lining. This was not the wisest thing to do as wool stretches when sewing until you keep a firm grip on it, and my lining ended up “just” big enough in places and too big in others. I left a small gap at one side near the back and pulled the whole bag right ways round and tentatively pressed the whole lot as flat as I could. As I said, it’s a bit  … lumpy. I had hoped to have nice neat side seams by whip-stitching them together, however the bag had become quite chunky with the lining and the cloth and I’m still not so confident in the security of my hand stitching. So I machine sewed the layers together (very slowly) and decided not to stress over an internal side seam.

The strap originally was going to be a woven ribbon, but my OH spoke logic to me and I ended up cutting several straps out of left-over lining, sewed the bits together at the shoulder and sewed the decorative ribbon to the pieces I had chosen to be “front”. I then pinned the “front” to the “back” and sewed them together up the sides, leaving the ends open for turning. I pulled the whole sausage right ways up, pressed it flat and quickly sewed a line of top stitching down the edges to convince the strap to remain flat. I then hand sewed the strap to the sides of the bag, tucking the raw edges in as I worked. This required a lot of pinning the strap on, then trying it on, adjusting the pins and trying again  – mostly because I wanted it to hang at a reasonable height to carry it without badly bruising my thighs with my coffee jar, but also able to reach my hand into it without having to dig around. I think I got the balance of this alright … 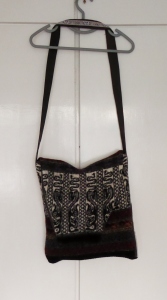 A Prayer to Inspire Those Around You

In preparing to go to Cathay Brigit thought to prepare a gift to give to the Dragons. Taking a prayer written by another player by an older character – Father Alexander Warwick – Brigit made a few subtle adjustments and copied it onto a scroll. The vine and leaves were added later and the roses were inked last, with the details filled in with a paintbrush rather than nib pen.

The seal and gosgrain ribbon were added to add a bit of flair and to help keep the scroll closed when in transit. 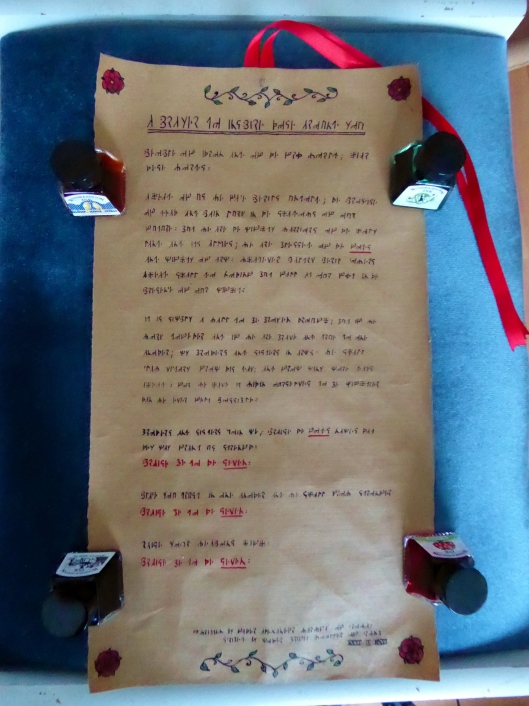 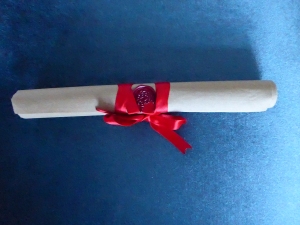 The text is as follows:

A prayer to inspire those around you

People of Ithron and of the free world, hear these words.

Ahead of us we face perils untold, the promise of death and pain lurks in the shadows of our future. But we are the mighty warriors of the holy land and its allies, we are blessed of the Gods and mighty of arm. Whatever paltry peril cowers ahead shall do nothing but fall at our feet in the presence of our might.

It is simply a wall to be broken through, but if we work together and if we are brave and true to one another, my brothers and sisters in arms. We shall claw victory from this day, and from many more days ahead. For we have it within ourselves to be mightier than we ever felt possible.

Brothers and sisters join me, praise the Gods’ names that they may grant us strength.

Place your trust in one another and we shall grow stronger.

This site uses Akismet to reduce spam. Learn how your comment data is processed.